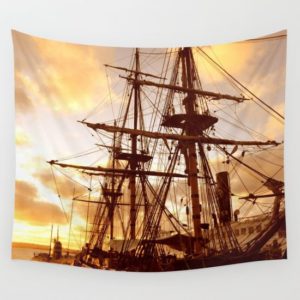 The last time Santa Teresa resident Thomas Ritchie launched his extraordinary wooden boat, Aurora Delfin, from the Pochoto rivermouth during the summer of 2009, he was a pirate in the open seas without any registered tags. The coast guard flagged him down numerous times and each time the officials boarded the vessel to inspect, the crew grew nervous.

“Three times we were boarded. They were pretty cool. They came up and grabbed the paddles. They’d start singing these songs, making video, taking pictures,” said Ritchie, relieved. “We were so scared.”

Ritchie’s friend, Angel Garcia, who was also on board added, “Imagine the coast guard boarding and saying, ‘You guys are cool. I know you don’t have drugs. This boat is so cool!’” 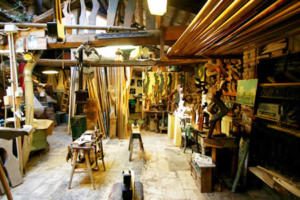 Ritchie plans to launch the boat for the first time this summer season in January in Playa Tambor—and this time he will start the journey with registered tags. He envisions that the Aurora Delfin will host small groups of surfers looking for remote waves only accessible by boat and offer educational tours when the ship drops anchor.

Amongst the seascape of white sailboats, the captivating watercraft that resembles something out of a Hollywood movie or fantasy causes a ripple of excitement wherever it’s spotted. During its last voyage, Ritchie gave tours to students from three different schools along the coast. In Puerto Jimenez, the kids dressed up for the field trip to the “pirate ship” with homemade eye patches, fake birds, and pirate flags.

“Later on, I’ll be in some supermarket far away and some Tico [will tap] me on the shoulder, whip out his cell phone [photo] and go, ‘my kid was on your boat.’ I’d be like, ‘this is crazy.’ I want to do more of that. It’s a lot of fun. It’s a good reward to give someone the opportunity,” Richie said.

Building the Aurora Delfin with dark hued teak wood planks, bamboo  (most of which was grown on his property) and epoxy coating, was a process that spanned 10 years. For seven of those years, the boat sat dormant in a garage, half-built and mostly untouched. As a surfer, Ritchie describes designing the graceful shape and smooth glide of the boat in surfboard terms like tail rocker, tapered sides and tapered nose. The double outrigger form, partly inspired by ancient Polynesian design, was made especially for surf conditions.

“The hull was designed to go for shallow areas, for bays and reefs for surfing. The double pontoons make it very stable. It is like a floating camping trip,” Ritchie said.

The final building sprint to the finish line was littered with hurdles and false starts. On one attempt, it didn’t make it out to sea because the glass bottom for viewing sea life cracked on a rock on the beach. For the next attempt, he got it out cruising in the water for seven weeks, but found the hull sat too low in the water and decided to truck it back home by land for a major redesign. After finally working out the kinks through trial and error, the Aurora Delfin II, in its current new and improved incarnation, made it’s first trip up the coast of Nicaragua and down to the border of Panama in January 2009.

Though the Aurora Delfin is Ritchie’s current, most time-consuming creative venture, it is one in a long line of his artistic building projects as a resident of Santa Teresa for 20 years. Ritchie first moved from Vancouver, Canada to Santa Teresa in 1991 after seeing and experiencing the beach’s prime surfable waves

“It was pretty underground,” Ritchie said of surfer tourism to Costa Rica. “Witches Rock [Roca Bruja] was just being discovered. Pavones had been around for 20 years, but no one had talked about it. It was just starting to hit the magazines. Salsa Brava on the Caribbean side—those were the three main waves. It wasn’t a destination spot. People didn’t just flock to Costa Rica.”

Ritchie claims to be the first foreigner to live in Santa Teresa through the rainy season. He camped with no electricity during the four years it took to build his two-story, circular house out of wood and concrete. His past ventures include renting cabinas, a bike store and a surf shop (which he sold and is now called Kina Surf Shop). He also built wood furniture and made art from driftwood and rock, which he continues to do to this day. But now that the fun summer surf season has arrived, he’s ready to escape the bustle of downtown Santa Teresa and live partly off the grid again, on a camping adventure out in the ocean.

“You stand up, paddle, you scuba dive, you’re out in the water,” said Ritchie of life on the boat. “It’s all about getting food, gas, supplies, water, staying on the boat, surfing, living, resting, cooking. It’s a whole different type of camping and living. It’s not for everybody.”

To find out more, visit www.reefrider.net.