Live in Costa Rica: Where the weather suits your clothes

When most people think “tropical climate,” they think hot and humid, with plenty of bugs thrown in for good measure. Perhaps they imagine a gentle tropical breeze occasionally wafting by, but the overall impression is of a muggy, warm environment. And true enough, one can certainly find plenty of locales here in Costa Rica that fit that description, particularly along the coastlines. But hop in a car or one of the many local buses and head up the mountains and within an hour you will be in spring-like weather that cools into the 60’s at night and only reaches the mid-80’s most days, which is probably the reason the vast majority of Ticos live in the Central Valley at around 3000’ elevation. This is a nation of microclimates: If one area doesn’t suit your comfort zone, another one will. Unless you love snow and ice or the dramatic variation of four seasons, there is bound to be a Costa Rican region that will feel like paradise to you.

My husband Layne and I experienced the extremes of climate in our first extended visit here in the spring of 2010. After a couple of previous trips as tourists (well, medical tourists, but that’s another column), Layne had zeroed in on the hills above Heredia as his first choice for ideal retirement weather. We had taken the Café Britt Coffee Tour near Barva in Heredia province on an earlier trip and he had been delighted with the fresh breezes and mild temperatures there. When the time came to select our initial destination for a three-month stay, he was certain that was where we wanted to be. So we scoured the Internet, settling at last on an apartment-hotel in an area known as Jardines de Roma, or Gardens of Rome. It sounded appealing.

As we learned, however, it is unwise to sign up for a month stay, sight-unseen. Apartotel Roma was not exactly like the photos on their website, shall we say. Our stuffy rooms were primitive and were located on a busy corner where buses stopped outside our door, muffler-less motorcycles went roaring by and the walk to any restaurant was a steep hike. Within 24 hours Layne was experiencing carbon monoxide poisoning from exhaust fumes! But having pre-paid a month, non-refundable, our only choice was to move up the hill to their “villas,” upscale homes in a gated compound in San Rafael de Heredia — and pay another $500 for the rest of our month. It felt like a classic bait-and-switch.

San Rafael, like most Tico communities, is a friendly barrio with a lively feria or farmer’s market, several nice restaurants and other amenities. But the climate was a steady wind blowing down from Irazu Volcano, often bringing fog and a damp chill. And this was the dry season! Clearly not the place for us.

On another trip, we had traveled through Atenas further west in the province of Alajuela, and while I had liked the sunny climate, Layne thought it might be too hot. Still, National Geographic had labeled the town as having “The Best Climate in the World,” so when I found a number of attractive rentals online priced at $400-$750 per month, we decided to give it a try. We took the bus from San Rafael to Atenas to meet Dennis and Gerardo, the delightful, knowledgeable proprietors of Pure Life Development who had lined up several rentals to show us. The first choices were in the downtown area and did seem sweltering, but as we headed up the mountain to see the last place, the air freshened noticeably. A charming two-bedroom chalet in Alto del Monte with a majestic view of the Pacific won our hearts immediately and was the right price at $600 per month. 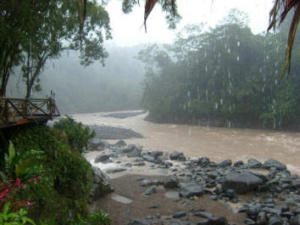 This was mid-March, the height of the dry season, and the next month and a half were heaven on earth. Beautiful sunny skies greeted us each morning and blissful cool evenings following glowing sunsets rounded out our days. But as early May approached and our 90-day stay was ending, clouds began regularly rolling in from either the Pacific or the Caribbean, depending on wind patterns. Then fog entered the picture. Layne and I looked at each other and wondered just how pleasant this little paradise would be during the upcoming rainy season.

After three months in the U.S., we returned to Atenas in late August, again seeking housing as our mountain apartment had been rented. And again, our friends at Pure Life Development came through, this time at a lower elevation in Barrio Los Angeles on the other side of Atenas. During the last of the rainy season in September and October, when we had occasion to head up the mountain, we smiled smugly as we entered that foggy region where we had lived in the spring. As we had suspected, it was damp and more consistently rainy than our new home in Los Angeles where even during the rainy months, mornings generally offered blue skies, saving rain for the afternoons. For now, we love it here but the hottest months of the year are still ahead and we may find that 1000’ lower elevation means a sizzling dry season.

But as they say, “Different strokes for different folks,” and that axiom fits the Costa Rican climate to a tee. While we were in the States last summer, our former neighbors in the mountainside duplex moved to San Pablo de Heredia where they anticipated cooler weather. Indeed, it turned out to be too cool and they are back in Atenas, but now up a hillside to the north in a barrio called Morazon. They say they have found their paradise. Another couple relocated down the hill from San Ramon, a good-sized city only about a 30-minute drive away, because the weather there was too foggy and cool and they also find Atenas to be “just right.”

For those who enjoy the brisk conditions of a mountain climate, there are many choices in Costa Rica. Some friends live in a rustic cabin in the tiny village of La Estrella outside Cartago at about the 6200’ level where the days rarely reach 80 degrees and the nights drop into the 50’s. When I shiver on visits there, our friend says, “Oh, you get used to it.” Rain forests around Tortuguero National Park in the northeast and cloud forests such as Monteverde offer their own beauties and distinctive climates as well as an astounding biodiversity of native flora and fauna.

Of course, Guanacaste in the northwestern part of the country boasts a large expat population largely because of its hot, dry climate while the Osa Peninsula in the southern region offers some of the most humid and rainy terrain anywhere in Costa Rica. The entire Caribbean slope is known to be wet and warm. With an elevation ranging from sea level to over 12,500 feet in this small country, the choices of climate are enormous. As Ticos like to say, if you don’t like the weather here, drive a few kilometers and you will. Pura Vida!

As of this Monday, the night vehicle circulation restriction will be in force again starting at midnight, which will...
Featured Event

Cannabidiol Prevents the Replication of Covid-19