Home Education Give Me Freedom. Or Give Me Death.
Education

Give Me Freedom. Or Give Me Death.

This one is for the men.

This desire to be free is simply part of human nature.

It compels us to create great things. It is the urge that has allowed us to defy limitations such as gravity, large bodies of water such as oceans and landmasses to build machines that take us where ever we want in the world.

Freedom is a magical force in us all ( men and women ).

Author David Deida writes, the essential “Masculine plea” is, “I want out of here!”

There’s something about the masculine nature that is always seeking freedom.

Yet the true source of freedom comes from with in. Not external.

And it is here where our culture, society and religions repress the masculine.

His freedom to express who he truly is. What he truly feels and desires.

Unfortunately in today’s culture it is common and true to say men struggle with deep and intimate love. It is confusing, overwhelming and darn right scary for many. And this fear results in this sense of needing to be free from it..to run from intimacy. Because growing from boy to man, in today’s environment it is not safe to show true feelings. Often it is a violent reinforcement dealt to shoe just how dangerous and not ok it is for the boy to express his feelings.

Deemed as weak, sissy and “just not right “ this attitude is now showing up loudly in our high divorce rates and higher suicide rates for men than women.

The masculines truest deepest impulse is to over power, to kill, to destroy, to f**k and to ravish and penetrate. There is no way around it. Where our world is struggling there is no safe way for this to be expressed.

In our white washed “modern” emasculated culture of the politically correct de polarisation of the masculine there is no room in society for the impulse to kill or f**k to be expressed.

In traditional cultures it is essential that boys go through some kind of initiation to prove to themselves and the other men that they are truly ready for the next stage of life.

Rites of passage have three phases: separation, liminality, and incorporation. More often than not it involves pain and being placed in the position where he may just die and not make it. Our so-called “modern society” Poets Are Our Modern-Day “Quixotes” in which we have the strongest and most disturbing issue with the only certainty of our life, death, often states these acts as barbaric.

Yet the fall out of the lack of rites of passage, the result of the masculine not having a safe place to express their repressed true nature is shown in our horrendous male suicide rates ( not seen in traditional tribal cultures ), depression, domestic violence, and high incidents worldwide of sexual abuse. The world we have created for ourselves where the masculine is emasculated has resulted in chaos and danger. Where the women of our world are not safe…that is what I call barbaric. The act of placing a boy of 13 to 15 yrs old into the jungle to build his shelter and hunt for his survival is empowering.

My lack of safety as a woman in this world is not.

Our truest nature, our sexual nature never goes away. It is leached and exploded out in un integrated behaviour.

Instead a beast was born to express freedom. The world’s economic system. Set up such that the more money we make, the more social freedom we have to go wherever and do whatever we want.

This widespread obsession with making money is what we have to represent social freedom created by the masculine.

The desire to be free is simply part of human nature.

Some are locked in physical prisons with metal bars and crave to be free of that, but nearly everyone is locked in the mental prison of the mind and absolutely craves, sometimes unknowingly, to be free of it.

It is paramount that the masculine feels comfortable with this essential part of his nature. Without doing so he is lost and either freezes or runs.

Emasculates himself, allows others to do so or abandons his family in his quest to get away.

In the past few decades the feminist movement has spent as much time lashing out towards the men as it has fighting for their rights to be treated equally in all areas of our world. Our right for equality is a non negotiable. And it has often resulted in an unwarranted flavour of hatred towards the blanket of all men. There is always a knee jerk reaction when coming back from a place of unbalance to equilibrium.

In response to one woman’s passage of words ( Janne Robsinson)

This is for you.

The men who are first to take a stand, face the fire of uncertainty and jump in the sea to save you no matter what.

The men who wont get a woman drunk just to get in her pants but does what it takes to be invited to fuck her wide open all night.

The men who know that women enjoy sex as much as they do and celebrate them for it.

The men that asks her for what she needs in bed. Over and over again.

The men that keep their word.

This is for the men that seek to make great changes in the world, determined to find their mission in life and follow it no matter what.

The ones that roar with rage in safe places as they free them selves of their fathers and grandfathers emasculated masculinity.

The men who seek relentlessly the truth. The ones who know when they see bullshit and call it out.

The men that open doors for women they don’t know because they see the beauty of the feminine in every woman.

The men who know their worth is not measured by their toys but by how they treat humanity.

The men that keep their hearts soft and their resolve strong.

This is for the men that don’t dismiss a woman for her feeling sense, but ask for her opinion and guidance.

The men that listen patiently and allow the feminine to unfold and blossom in front of him.

This is for the men that fight for his family and care for his children no matter what.

The men that learn to penetrate his lover through her mind and her heart with knowing it is still an invitation only to her pussy.

The men that spend time on their own cultivating their passions and doing their own personal work for themselves.

For the men that know their woman is not their therapist.

The men that do not stand for injustice and stand in the line of fire.

The men that laugh deeply from their souls and are relentless in finding joy.

The men that get their hands dirty, keep their minds dirty and know how to clean up afterwards.

For the men that are not intimidated by a woman’s brilliance and shows her constantly his appreciation of her.

For the men that fight for a woman’s heart and does not give up the fight once he has gained her trust.

The men that build stuff, carry stuff, fix stuff and tuck the children into bed at night.

This is for the men that pulls the chair out for her to sit down because he is delighted to be in the company of a queen.

For the men that understands that a queen needs a king.

For the men that can receive.

The men who hold the people who harass or wrong them with fierce accountability.

The men who run successful companies along side of women and know he could not do it with out her.

The men that know and respect that a woman’s lunar cycle is completely opposite to his solar cycle. And her contribution is highest when she knows she can give not when he demands.

The men that ask questions then take the load off.

The men that hear no and don’t act from their ego having a tantrum like a 3 yr old.

For the men that do give a damn about pleasing their woman.

For the men that step up for no other reason other than seeing the injustice of single mothering. Those that contribute where the fathers are not. I bow down to you.

This for the men that go against the toxic masculinity and fight for what they love.

For the men that keep on going no matter what. That pick themselves up and face ridicule in order to protect their loved ones.

The men who know how to work, plant their feet on the earth, get grounded and demand other men to do so.

The men that know is biggest weapon and way to success is his well f**ked woman.

These are the men I want around me.

If you are a man that is ready and wanting to shift your blocks around sexuality, relationship issues, PE and Erectile dysfunction ( social dysfunction ) then I have just released my Activated Man content as a 5 week course fed to you via email. You get to do this work in the safety of your own home. Are you ready to be a leader in your family? Community ? The World?

Especially now more than ever. There is a world out there being magnified right now of emasculated men. We need you to rise and take a stand. In your own home. In your community and in the world.

But first knowing your own true power as a man through your sexual energy is paramount.

Even Napolian Hill spoke about it in his book “Think Big, Grow Rich”

It aint no secret Lover. Your sexual energy is your power.

It is time to know it and live it

Or reach out to me via www.melissalouise.world 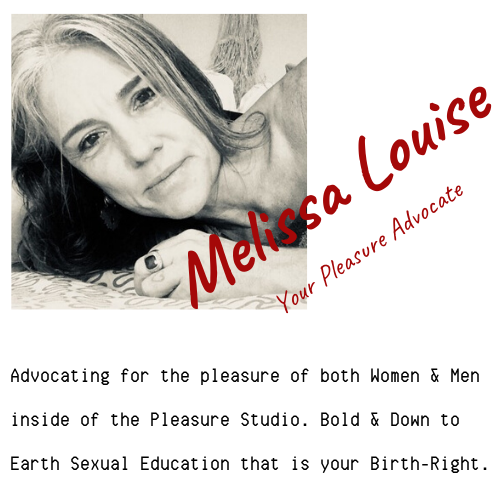 Vagina Shaming. It Is a Thing

Recently I have been doing a lot of reading on this whole “Barbie” procedure that has swept...
Read more
Education

Sex Is The Glue in Your Relationship

Want to know what your secret weapon is in creating the life you want?
Read more
Health

Guys.Do this every day to increase your Testosterone. Testicle Massage Have a little time on your hands these days?...
Read more
Health

Why Tracking Your Menstrual Cycle Is so Important

Women you are not a problem to fix.  And your menstruation is definitely not...
Read more