Costa Rica has a garbage problem, and it’s more complex than you think.

Despite national-level efforts to make Costa Rica a greener country, it seems the general population still fails to see the value in personally maintaining the environment from the harms of littering.

All throughout San Jose, despite otherwise successful efforts to create natural space within the urban center, street cleaners work hard at collecting garbage, cleaning off graffiti and just generally keeping the place in order. Even so, remnants of carelessness still pile-up in corners.

In the homes, the story is only slightly different. Urban development’s dump all waste on the street or in their dumpsters for bi-weekly collection and many rural homes simply burn or bury their consumed goods. Little is being done to reduce waste, let alone recycle it. That’s where Ley 8839 comes in, a law developed in 2010 for the improvement of waste management throughout Costa Rica. In its own words:

This law is based on the fact that integral waste management is a responsibility shared by all actors, whether they are producers, generators, consumers, managers, public authorities or the general public, and it depends on [each actor’s] role, thus compliance is your responsibility. Special emphasis was made on citizen participation, not only in the construction of different instruments that the law creates but also in the search for solutions to the problems facing the country…

In hopes to draw in this citizen participation, the nation has dedicated to Ley 8839 its own well-maintained website and Facebook page where details are given for both individuals and businesses on how to recycle, where to recycle, and why to recycle.

For example, most of Costa Rica’s recycling centers are still on the pre-sort system, meaning you must separate the various types of recyclable materials in your home. Ley 8839 suggests the following four-sort system:

It has been said that recycling one ton of paper saves 20,000 liters of water and 4,000 kWh. Furthermore making new paper from old products consumes 30 to 55% less energy than making paper from virgin pulp and produces 73% less air pollution. Still, recycling in Costa Rica has its benefits for the individual too. La Calma Recycling, for example, will collect from their customers anywhere in the country and will pay you for it. Ley 8839 provides an entire list of other recycling collectors on their website, but a translated and updated version of the document can be found here. Recycling in Costa Rica is possible, despite its non-existent popularity.

Recycling Our Way Into Deeper Poverty

With so many positives to recycling, it seems odd that a country so dedicated to being green in every other context would fall short. There may be a reason for Costa Rica’s lack of recycling habits or at least a desperate excuse for them.

The dark side of recycling is linked to still-developing the nation’s economic situation.

With unemployment at about 9.7%, Costa Rica had the second-highest percent of unemployed persons in all of Latin America last year. This has led many to resort to less official professions such as guachimen who watch your parked cars for a few coins, street vendors who carry display their goods downtown on a blanket for quick relocation, or scavengers are known sometimes as “skin divers” who despite laws against it, pull out recyclable goods from landfills.

Chances are if you have seen individuals climbing the small mountains of trash on the edges of town, they were not so much looking for scraps of food or clothing but rather tins and plastic to be turned into a local collection center for money. In fact, there is an entire system of people who do such work: some collecting the items from the landfill, others separate them, and others actually transporting the goods to the centers. 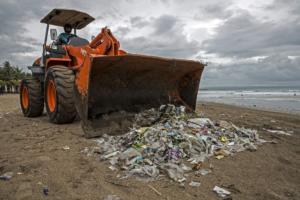 The Ethics of Trash

The question thus remains: to recycle or not to recycle? For greenies or those used to a more developed trash management system, being told not to recycle may sound like nails on a chalkboard. Nevertheless, the unique situation in Costa Rica begs us to look deeper into the issue.

On the one hand, it seems clear that blatant littering is helping no one. It pollutes the rich ecosystem, promotes disease for both humans and other animals, and it makes cities less appealing for tourism and business. Littering is, therefore, a topic that must be better addressed by the government and the rest of the country.

On the other hand, many people place their trash in the correct locations for proper collection. It is these households that must ask themselves the ethical question of whether they are going to make the effort to collect, separate and bring their recyclable waste to the appropriate centers. That is a question that must be answered individually.

Some reason that the value of maintaining a clean environment surpasses all others. Others see it as their social responsibility to help out the less fortunate by at least presorting the materials before sending them to the landfills.

Whatever the case, in the controversial words of one woman living in Costa Rica, it seems there is a prevalent theme: Recycle!

Farmer´s Market In Costa Rica, of Great Importance for Their Communities