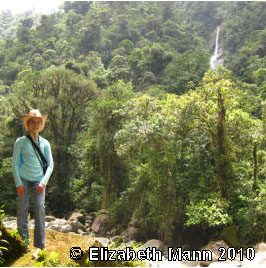 Tapanti National Park in Costa Rica is located on the edge of the Talamanca Range, near Cartago. The park contains 45 species of mammals and 260 kinds of birds including the spectacular Quetzal! The park is also home to 28 species of reptiles. The area in which the park is located, is one of the rainiest areas in all Costa Rica. It receives an annual rainfall of 250 to 300 inches! The heaviest months of rainfall is May and October. The rainfall provides water for the 150 rivers located in the area.

The La Pava Trail at Tapanti National Park proceeds to the Salto and Palmitas Waterfalls. The Salto Falls is a 300-foot high waterfall! The towering falls can be heard from a distance as it’s powerful waters come crashing down the mountain side. I had a sense of entering the Garden of Eden as I gazed at the forested mountain side which contains the Salto Falls. 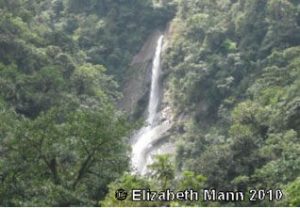 Along the interior of Tapanti National Park, rushes the white water rapids of the Grande de Orosi river. Various other rivers and streams empty their waters into the Grande de Orosi river. The powerful rushing fluids are used to generate hydroelectric power and to supply clean drinking water. The giant boulders which dominate the bountiful waters are proof to it’s powers. It is said that during the rainiest seasons the waters can begin to raise and move boulders across rivers. The signal of such a movement of water sounds like roaring. If you hear roaring that continues to increase it would be a good idea to flee the river because such a powerful current will remove everything in its path. The rapids and falls are both a source of power and beauty. See my video of Tapanti National Park
To read more about my tours visit http://elizabethssecretgarden.blogspot.com/ 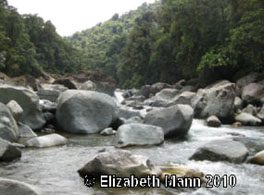