Over time, these buildings became historical architectures and architectural heritage of our country, get to know them.

The Macaya building (formerly known as the Macaya Hardware Store) is a historic building built in the city of San José, Costa Rica at the beginning of the 20th century on behalf of the Colombian merchant Miguel Macaya Artuz and his family. Since its opening it was used as a large warehouse or hardware store, where imported products of almost any type were found.​

Simply known as Edificio Knöhr, it is a property located in the city of San José, Costa Rica. It is located on Central Avenue, at its intersection with Calle 1. Its construction dates from 1914, commissioned by the German merchant Juan Knöhr, with the initial purpose of functioning as a warehouse for the sale of imported groceries and materials. It is one of the buildings in the Costa Rican capital that preserves its neoclassical historicist-style architecture, with decorative elements of Italian origin and a structure of hot-rolled steel and reinforced concrete, which was an innovation at the time of its construction. Its construction represented the consolidation of the national economy led by German immigrants since 1840. Due to its value and great architectural beauty, it was declared a historical-architectural and cultural heritage of Costa Rica.

The La Alhambra building is a historic building built in the late 19th century in San José, Costa Rica. Its construction was commissioned by Ramón Rojas Troyo, a wealthy Costa Rican merchant of the time. The building was assembled in the city with materials and parts imported from Belgium, and its construction was also supervised by Belgian engineers.

Currently, the Alhambra is occupied by several warehouses and is sometimes used for artistic exhibitions.

The Atlantic Railway Station is a historic building and railway terminal located in San José, Costa Rica, declared an Architectural Heritage of Costa Rica by decree No. 11664-C of July 29, 1980.

Built-in 1808, and operating until 1996, it was the main terminal from which the railroad connecting San José, the capital of Costa Rica, with the city of Limón, the main port of the Costa Rican Caribbean, arrived and arrived.

It is considered an emblematic building of one of the most relevant historical periods in the history of Costa Rica, such as the construction of the railway to the Atlantic.

Between 2002 and 2008 it was the headquarters of the Museum of Forms, Spaces, and Sounds, but in 2011 it was renovated by the Ministry of Culture and Youth of Costa Rica to resume its functions as a terminal of the urban train that connects San José with the cities of Cartago, Alajuela, and Heredia.

The Luis Oye Building, also known as the old Luis Oye Warehouse or the former Esperilla Hardware Store, is a building located in the city of San José, Costa Rica. It is located in the Merced district, at the corner where Calle Central and Avenida 3 meet.

The site of this building is of historical importance: the first hermitage of San José was located there, during the colonial period, and later the colonial residence of Antonio Pinto Soares was built there.

Since 2007, the Luis Oye building has been a historical-architectural heritage of Costa Rica because it is considered to reflect the progressive and entrepreneurial spirit of an era in national history. 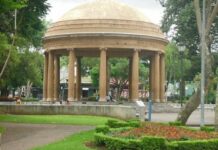 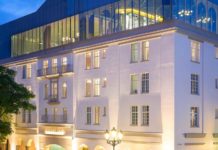