Women who work in biodiversity management, agriculture, ecotourism and research will be able to access financing of up to ₡ 10 million. This measure will seek to lessen the impact of the economic crisis of COVID-19 on nature protectors.

The Ministry of Environment launched on May 22nd the initiative “+Mujer+Naturaleza” (+Women+Nature), in conjunction with the United Nations Development Program (UNDP). This initiative would seek to help a sector seriously affected by the COVID-19 crisis. “We are providing a package of opportunities for all those biodiversity managers who are going through a difficult situation,” said Vice President of the Republic, Epsy Campbell.

Forest financing has allowed Costa Rica to recover its vegetation cover, after a period of significant deforestation. So far, this is the only country in Latin America that has managed to reverse deforestation.

The idea of financing is that women can access machinery, infrastructure and capital for reforestation and forest protection projects. They can be financed in two ways: a credit from the National Forest Financing Fund (Fonafifo) and another from the conservation organization Fundecooperación.

The Fonafifo loan would have a maximum amount of ₡ 5 million for a term of ten years and an interest rate of 4%. This will finance “innovative forest-related projects”. To apply you can call 2545-3500. For its part, Fundecooperación would grant loans of up to ₡ 10 million, with a maximum term of 5 years. To apply for this credit, you can call 2225-4507. 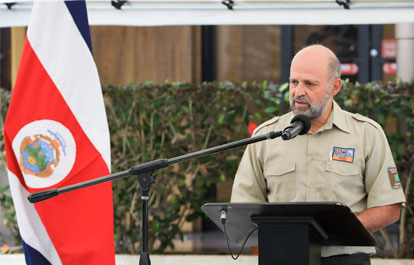 As noted by the Minister of Environment, Carlos Manuel Rodríguez, in an article published in the English Financial Times, nature conservation could help rebuild the economy. “Today, the world urgently needs a new commitment to nature, as we recover from COVID-19. Nature should be at the heart of any recovery we seek,”says the Minister.

The conservation of biodiversity depends largely on ecotourism, as explained by the biologist, Esteban Brenes. According to him, the COVID-19 crisis has forced them to “rethink” this business model.

The current financing mechanism for forest conservation projects, called Payment for Environmental Services (PES), is what allowed the country to achieve a forest cover of 52% of the national territory. The idea of this program is simple: to pay private farmers so that instead of incurring in deforestation, they can maintain the forest profitably on their plots.

Since the start of PES in 1997, more than 31,000 beneficiaries have participated in the program. This financing is administered by the Fonafifo and pays more to reforest with native species and in large areas. The maximum amount that Fonafifo allows is ¢3 million per month. However, only Indigenous Association contracts reach these amounts, since they must be divided among the community.

Indigenous Women Reaffirm Their Role as Leaders, Protectors of the Forest, and Entrepreneurs

60.3% of Women in Costa Rica Made Adjustments in their Household Habits Due to the Pandemic