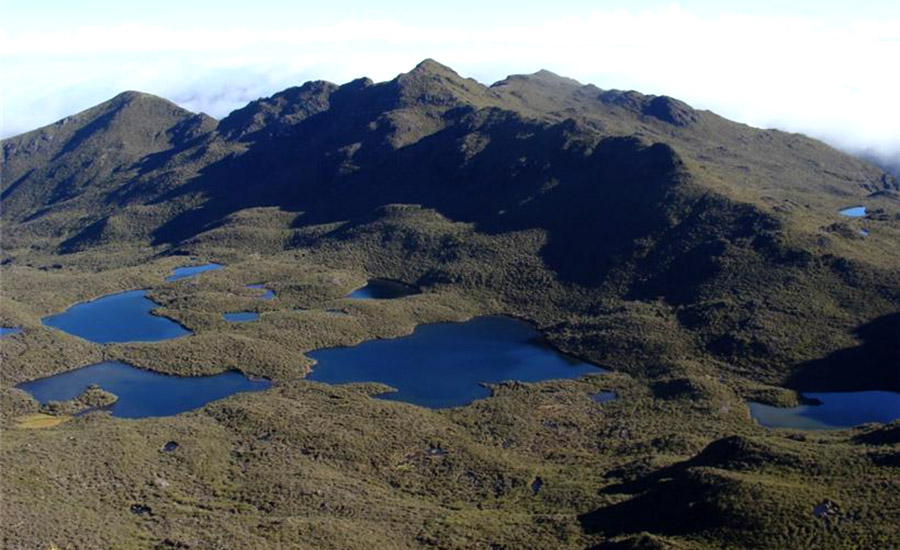 Chirripó National Park in Costa Rica is famous because there is the highest point in Costa Rica, the Chirripó hill, with an altitude of 3,821 meters above sea level. It is part of the Talamanca mountain range, which divides the country into northwest and southeast. Located in the La Amistad – Pacific Conservation Area, in the southern region of the country.

In the park, there are different vegetation areas such as the moor, the cloud forest, and the humid forest. According to the testimony of some indigenous people, it was Father Agustín Leasing, Missionary of Talamanca, the first white man to conquer the summit in 1904. Then there were expeditions in 1905, 1913, 1915, 1920, 1932 and 1942, and since then they are much more frequent.

One of the most interesting geomorphological discoveries that have been made in the Chirripó is that of the modeled and varied U-shaped terrains that attest to the passage of glaciers, moraines, glacial terraces, lakes and glacial circuses whose action dates from about 25,000 years ago.

In the upper part of the park, there are 5 areas of great geological, biological and landscape beauty: the Savanna of Los Leones, the Valley of Los Conejos, the Chirripó Hill, the Morrenas Valley and the Los Lagos Valley.

In the Los Lagos (the lakes) Valley we find the Chirripó Lake that in its bottom contains a series of sediments with coal that date from about 4,000 years ago and that come to demonstrate the manifestation of forest fires in remote times, perhaps caused by natural phenomena such as lightning or by practices of our indigenous ancestors.

The park protects the upper basin of the Pacific Chirripó River, tributary of the great Torraba River basin; the same as the upper basin of the Chirripó Atlántico River, the main tributary of the Matina River. The protection of these basins with their infinity of streams and springs provides security to downstream residents, as well as high-quality water, both for domestic, agricultural, industrial, recreational and hydroelectric use.

Chirripó refers both to the name of the highest mountain in Costa Rica, which reaches 3820m (12,533 feet) and to the name of one of its National Parks, which also takes its name from the indigenous word of Talamanca which means «Place of Enchanted Waters ».

Around the 3,400 meters high peak there is an area called El Paramo (the moorland), in which the vegetation is without large trees, of bushes with a height not greater than 4 meters and sometimes so intermingled that it considerably hinders the passage. One of the most common species here is the batanaba chasquea or cañuela.

Another area here is that of the cloud forest, humid and cold, which has oak trees up to 50 meters high, always green, with squatted crown, leathery leaves, and acorns as fruit. It is characterized by a high content of arborescent ferns, mosses, Bromelia, palms, and orchids distributed in different strata of the forest.

Among the animals that we can find are squirrels, pumas, jaguars, Dantas, rabbits, coyotes, toads, frogs and a great variety of birds such as goldfinches, hummingbirds, mosqueríos, climbers, recesses and the metallic green quetzal, birds that feed on a type of lauracea called brava or avocado, worms, insects, reptiles and small amphibians.

Los Crestones: Location: 1.5km from the Crestones base hostel. Main Features: Panoramic View of the Talamanca Mountain Range and the Pacific and Atlantic Oceans. The site to practice rock climbing, although it is not allowed to climb the Crestones.

Terbi Hill: Location: 1.7km from the Crestones base hostel. Main Features: Panoramic view of the Talamanca Mountain Range and the Pacific and Atlantic Oceans. Geomorphic rocks. It has a mailbox for visitor annotations.

Valley of Los Conejos: Location: 2.5km north of the Crestones base hostel. Main Features: It is an ancient glacier circus, where the Talari River originates. In this place, the first shelter of the Park was built in 1965.

Ditkevi Lagoon: Location: 3km north of the Crestones base hostel. Main Features: Glacier origin, with depths from 8 to 12 meters.

Chirripó Hill: Location: 5.5km north of the Crestones base hostel. Main Features: the Highest point in the country and second highest in Central America – 3820 m.a.s.l. panoramic view; being clear you can see the Pacific Ocean and the Caribbean Sea. Rocks of volcanic origin.

Savanna of los Leones: Location: 4km east of the Crestones base hostel. Main Features: High valley with the presence of different types of vegetation. On the trail, there are excellent viewpoints of the Valle Del General.

Las Morrenas Valley: Location: 7km north of the Crestones base hostel. Main Features: Lagoons of glacial origin that drain its waters through the Chirripó Atlántico River. Covered entirely by wasteland vegetation. You can see the remains of the hostel built-in 1975.

Valley of Los Lagos: – Location: 5.3 km north of the Crestones base hostel. 3 lakes of glacial origin. Main Features: Lake 22 meters deep and that gives rise to the Pacific Chirripó River.

El Paramo: Location: At elevations more than 3000 m.a.s.l. Main Characteristics: Ecosystem dominated by grasses, with an area of 6,000 hectares, with temperatures that can descend to 9ºC. There is high endemism in species of flora and fauna.

The climate of the park is very variable and unpredictable and depends especially on the altitude. In general, it is very wet between May and December; and it becomes very dry and sunny from January to April. The highest parts are subject to strong winds, frosts, frequent drizzles, and sudden temperature changes, to the extent that the lowest recorded in the Chirripó and the country, has been nine degrees below zero celsius. The average annual rainfall is 3,500 mm, to 5,000 mm.

Los Crestones: Symbol of natural wealth for the country.

Los Crestones hills are located in the Talamanca mountain range, one of the longest in the country with 190 kilometers in length, properly in the Chirripó National Park, and declared a World Heritage Site by UNESCO and also, this protected area is part of the International Conservation Area La Amistad-Pacific Biosphere Reserve, which Costa Rica shares with Panama. The Crestones are located at 3,720 meters high. They were formed by a process of folding of the earth’s crust, resembling gigantic and impressive “fingers” of rock up to 60 meters high, made of igneous material.

One of the most outstanding formations is the “needle”, which is over 60 meters high. From that point, you can see the magnitude of the landscape that surrounds the southern part of the country, particularly, the Isla Del Caño, the hills of the mountain range such as Cerro Chirripó, Cerro Ventisqueros, and the Sabana de Los Leones, El Valle General and a panoramic view of the Pacific Ocean.

On April 14, 2011, the hills of Los Crestones have declared a National Symbol. It was sanctioned by President Laura Chinchilla Miranda on April 28, 2011. On September 5, 2011, it was published in the official newspaper La Gaceta under Law No. 8943, which declares them as such.

The special designation is recognition of the potential contribution of Los Crestones to the national economy, as well as its scenic and natural value, since it recognizes the geomorphological, physical, abiotic and biotic characteristics of Los Crestones, since they imply a great natural wealth not only for neighboring communities but for science and tourism. They are part of the identity of the nation and represent the wealth and conservation efforts that have been achieved as a country. This designation also allows public institutions to promote this tourist destination as a “country brand”. For its part, the Ministry of Public Education is authorized to incorporate in its educational programs the linking of this symbol as a transversal axis of civic education, as a means of transmitting knowledge, values, customs, culture, morals, behavior and awareness to Costa Rican students.

The Irazú Volcano. Come To Know Its Amazing Top