Within the world of fauna there are many little known animals, this time we will talk a little about the “sloth”. Among some of the facts, we can say is that animals are not bears, as what is usually thought.

They are Xenartros (toothless) one of the oldest New World mammal groups, which includes three types of species: sloth, anteaters and the armadillos.

Origin and types of sloths

These animals of various sizes, endemic to the Neotropical region, from the Yucatan peninsula in Central America to Brazil. So far, six different species of sloths are known, divided into two genera: three-toed sloths (Bradypus sp.) and two-toed sloths (Choloepus sp.)

Sloths are classified as folivores, since the bulk of their diet consists mainly of buds, young shoots, and leaves, mainly from trees of the Cecropia genus.

Two-toed sloths have six cervical vertebrae on their necks and nine or ten on three-toed sloths necks.

They have no teeth, rather anterior and posterior rows of cylindrical protuberances, all approximately equal devoid of enamel cover,

but which have acquired a crushing surface and continued growth.
The front legs are longer than the hind legs and have hooked nails to hang from the branches.

In the pectoral girdle, the clavicle articulates with the coracoid (prominent bone of the shoulder girdle in mammals), is a unique character among mammals.

The three-toed sloth has a small tail while the two-toed sloth lacks it.

Its claws measure 8 to 10 cm and work as grip tools as well as defense.
Size varies according to gender.

The one with two nails is larger with a body length between 58 and 70 cm and weighs between 4 and 8 kg.

The three-toed sloth measures approximately 45 cm in length, weighing between 3.5 and 4.5 kg.

Why are they so slow?

The leaf-based diet is very poor in nutrients and the calorie intake is very low. Because of this they must have a very slow metabolic rate to cope with low-calorie intake.

These animals inhabit tropical forests, which are characteristic of warm and humid environments where the normal advantages of an endothermic system (the one that allows mammals to internally regulate their body temperature) are not really necessary, the environment is already warm, so they really don’t need to spend a lot of energy to stay warm.

By abandoning the endothermic traits that evolution has gifted mammals, sloths have adopted a slow lifestyle that allows them to save energy more similar to cold-blooded animals like reptiles.

In Costa Rica sloths have their place of refuge. The Sloth Sanctuary is one of the few shelters in the world for this species, open to the public.

The Sloth Sanctuary is located in the city of Cahuita, almost four hours from San Jose. This place is home to the two unique species of sloths from Costa Rica: the two-toed sloth and the three-toed sloth.

Its mission is to rescue these animals in favor of their preservation as a natural heritage species of our country.

It receives these animals every week for rehabilitation.

During their stay, veterinarians help them heal if they get injured and teach them how to survive in the wild.

For people who visit this place, there are tour guide packages between 2 and 3 hours. Among these packages are:

The “Buttercup”, where you can travel by canoe along the Estrella River, crossing a beautiful landscape of tropical forests. Here you can see the natural habitat of two and three-toed sloths.

“Insider’s Tour”, is aimed at explaining how rescuers and veterinarians carry out their daily tasks of helping the sloth.

On this trip you will have exclusive access to the “sloth maternal hospital”. You can also visit the “jungle gym”, where sloths recover from their injuries and/or are trained to return to their habitat.

And for those who for some reason cannot take sloth observation walks which you can do with a guide or on your own.

You can also visit the sloth museum behavior of the species that are currently found in Costa Rica.

The Sanctuary also has a store with stuffed animals, small sculptures, photographs, and other souvenirs.

Likewise, they offer transport units according to the number of passengers, all equipped with what is necessary so as not to be left behind on the road.
The sloth is one of the slowest animals we can meet, and they represent an attraction for fauna lovers worldwide. 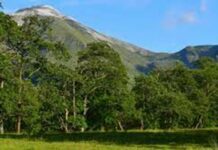 Corcovado is One of the Ten Greenest Places on Earth 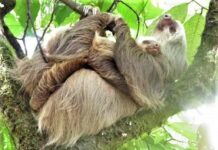 Costa Rica, a Country Rich in Fauna That Everyone Should Know About 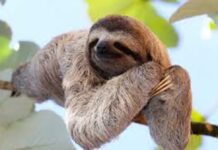 The Sloth Becomes A National Symbol Of Costa Rica