There are 18 different varieties of poisonous snakes and some varieties of spiders in Costa Rica. The tarantula poison only causes excoriations, therefore they are not dangerous. The poison of some species of frogs is used by the indigenous population at the tip of their arrows for hunting. As long as you do not eat frogs and toads they are not a threat to humans. 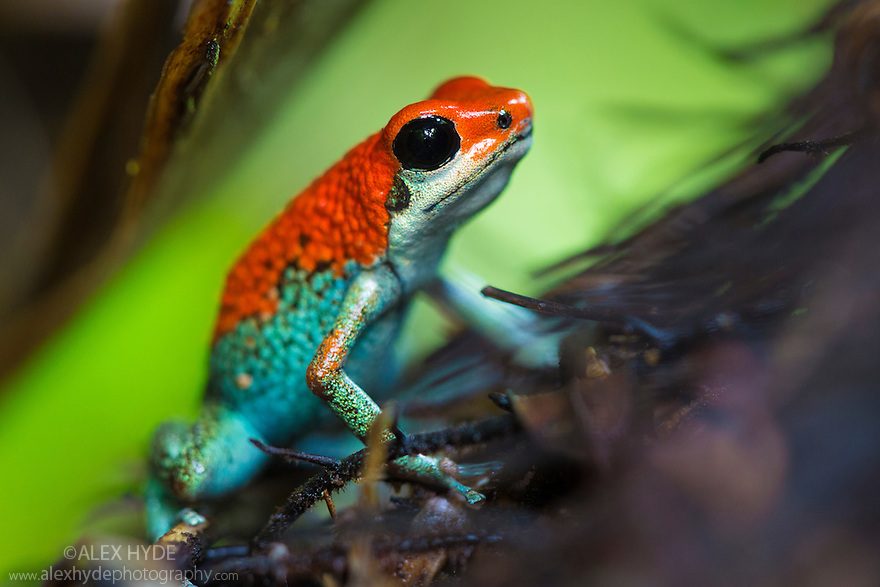 Among the most poisonous animals in our country are spiders known as “black widows.” These small spiders are widely distributed on all continents and around 30 species are known. However, it is curious that in Costa Rica many people maintain the erroneous belief that the black widow is only found in North America, probably due to its appearance in some films and documentaries made in that region. 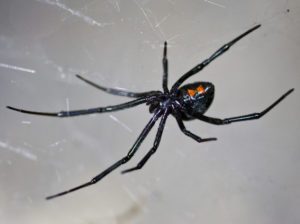 The truth is that in Costa Rica there are three species of black widows, belonging to the genus Latrodectus. The body of this spider is bright black and has a series of red spots, in addition to an hourglass-shaped lower abdomen that characterizes this group. Likewise, another species present in much of the Central Valley of Costa Rica (Latrodectus) has a light brown or dark body with spots of various colors such as yellow, brown and white.

The bite of these spiders is much feared because it is considered that its venom is about 15 times more powerful than the venom of a rattlesnake. The effects of this poison on humans include muscle pain, nausea, and paralysis of the diaphragm, which makes breathing difficult (neurotoxic effect). However, the severity of this poisoning depends a lot on
age, especially if they are young children, the elderly or compromised health status of an affected person. Poison dart frogs. Among the small gems of the rainforests of our country,

Known Dart frogs, the poison of these amphibians have been used by South American natives to impregnate the tips of their spears for hunting. In this process, they take the frog and expose it to the heat of the fire so that it exudes small amounts of poisonous fluid. These small frogs of the genus Phyllobates, are native to America and are distributed from Nicaragua to Colombia. The components of this group are distinguished because they are very colorful and because they vary in their degree of toxicity according to the species. One of these species (P. terrible, from Colombia) is considered the most poisonous of all the animal kingdom.

In Costa Rica, we have the poisoned frog striped of the South Pacific (P. vititos), which is distinguished by its orange stripes on the sides of the body. This species of diurnal habitat lives on the forest floor, usually near water sources. The skin of these frogs contains an extremely potent poison, a powerful alkaloid called batraco toxin, whose effects are mainly neurotoxic, which means that it can cause respiratory arrest due to progressive muscle paralysis.

However, the main function of this poison is defensive, because it prevents them from being easily eaten by many predators such as birds, snakes, lizards, and other larger frogs. Because these frogs have no ability to inject this poison (it is only in the moisture of the skin), they can only affect humans if they reach the bloodstream, the nasal passages, the eyes, or if they are ingested, and and this would only happen if they are manipulated and then the hands come in contact with eyes or nose, or if the skin of the frog makes contact with an open wound.

Poisonous frogs belong to the scientific family Dendrobatidae, which contains more than 175 individual species that are distributed in a range that includes much of Central and South America. Despite its great diversity, only seven types of poison frog reside in Costa Rica – and only three of those species have bright colors.

Travelers in Costa Rica who want to see these animals can do so on a visit to Puerto Viejo de Talamanca, Puerto Viejo de Sarapiqui or Tortuguero National Park. Perhaps the most famous species in Costa Rica is Apaga pomillo, which is present in a wide variety of colors. The most common is orange with black spots, making the animal resemble a strawberry. Another stained coloring pattern is often bright orange with blue markings on the toes and legs, making it look like the frog was wearing a pair of blue jeans.

A unique feature of the “blues jeans” frog is the way it feeds its young. The females lay the unfertilized eggs often in the bodies of water where their tadpoles live, which allows the tadpoles to use the eggs as a source of nutrition. This unique behavior lends to part of the species its scientific name, as “Oophaga” that comes from the roots of the Greek words for “egg” and “eat”. 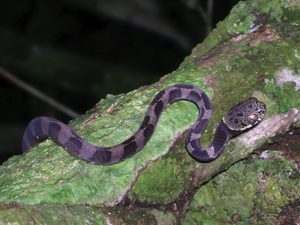 This is the most common Costa Rican snake. The growth rate is exponential with up to 90 snakes produced per litter. Besides, this snake is one of the most poisonous and aggressive, making them the most lethal in Costa Rica. It averages 140 and 180 cm in length. The females are much longer than the males. The body is moderately robust, cylindrical or laterally compressed; its head is large, well-differentiated and triangular seen dorsally. With a short tail, dorsal scales between 21 to 35 rows, it presents 7 supralabials.

Of dark gray, brown or olive green color, with a dorsal pattern of triangular designs on both sides of the body, seen dorsally the designs recall a letter X, which is why in much of its distribution the species is also known as the X snake. It is distinguished by the presence of bands on each side of its head. It has two powerful fangs with an internal channel for the conduction of the poison, located in the anterior part of the maxilla. These fold inside the mouth when closed. They present a phase on the real size of the eye, aligned with the eyeball and the nostril. Inside it is the thermo receptor organ.

It feeds on small mammals and birds, occasionally anurans and lizards. Terrestrial and daytime habits. Vivípara, very fertile, litters up to 90 young. It is one of the most abundant snakes in the country. They are highly poisonous, tending to bite if they feel threatened and live close to the human population because they adapt to disturbed environments, which explains why they are responsible for more than 50% of the ophidic accidents in the region. 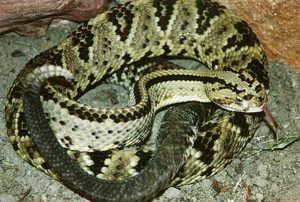 This viper jumps to grab its victims. Also known as the “Costa Rican Stone Hand”, it will reach the length of the whole body to try to inject the unpleasant surprise that it has in the fangs. The longest recorded was 120 centimeters, and the average is 85-90 cm. With a sturdy body, cylindrical or laterally compressed; very large head, well-differentiated from the neck. Short tail. Moderate eye with vertical pupil. Dorsal pattern with 25 to 30 dark designs of rhomboid shape, which usually fuse and form a wavy, dark pattern on a light background. The head can be smooth or keeled, with small and numerous scales. Fangs in one or two pairs, located in the anterior part of the maxilla, perforated for the conduction of the venom, folded inside the oral cavity when the mouth is closed. Presents a phase that houses the thermo receptor organ, located in an equidistant way and aligned with the eyes and the nostril. Gives live litters of between 5 and 27 young.

This snake is a master of camouflage with its bright green leaf color. Found mainly in the jungles of tropical mountains in Costa Rica. They have a yellow-white stripe on the side giving it its name Poisonous Lora. Small to moderate size (60-70 cm). Slim body, longer in the male. Well-differentiated head to neck.

Snout with a rounded profile, with two perforated fangs, located in the anterior part of the maxilla, folded into the oral cavity when the mouth is closed. Emerald green or bluish-green color, of uniform distribution in the adult, with pair of yellow lines along the body, separating ventral scales from dorsals. It is an arboreal species, so snake accidents usually occur in the upper extremities of agricultural workers. 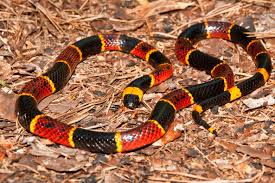 You will notice that this snake has a nose that looks like a pig’s. But do not laugh too much, since it is not a nice surprise to be bitten by this snake, small in size, 65 cm, females are longer and sturdier than males. Wide head, large and well defined. Pointed snout. Short tail. High rostral scale that looks like a horn. Dorsal scales keel. Background color gray, reddish, dark brown or black. It has dark rectangular marks along the body, separated by a narrow vertebral line. Terrestrial is hidden among the leaf litter of the forest. Active day and night. It feeds on frogs and lizards.

They are the largest type of viper in the world. The largest was registered with 4 meters in length. Although commonly they grow only 2-3 meters. Since they are rattlesnakes they have a thorny ending that vibrates when threatened, which leads to the name of the silent rattlesnake.

Before going out into the deep jungle it is good to know some security measures. First, know when to go. During the wet season in Costa Rica snakes are everywhere. Especially on the trails of the rainforest and trees. So before going alone, you may prefer to take a guide who knows the safe route and who knows how to detect this type of animal.