The peak of the Turrialba volcano has fumigated the central valley with ash and sediment for days, out of our control, but under the intense watch of experts and authorities. Eruptions like this are sometimes foreseen but can’t be controlled, although, sadly an unlucky few will always fail to escape the devastating natural effects. Now it seems that long before this recent volcanic activity there has been, and will continue to be, a considerable plume of smoke emanating from the fingertips and lungs of people young and old in Costa Rica. In 2012, anti-smoking legislation was passed in a similar fashion to most other developed nations, including the restriction of advertising and branding on cartons of cigarettes and implementing ‘smoke-free’ zones in parks, bars and where people may gather in general. As a matter of simple truth, we cannot prevent the large scale volcanic eruptions and their disastrous effects on natural and public health. But, it might be sensible to think that we can prevent people from dying of tobacco smoke related disease. A recent study has shown the new legislation, a generous three years on, has produced effects on the smoking population that seem to be as volatile as the legendary ring of fire, itself.

The authors of ‘Effects of a new tobacco law on the knowledge, attitudes, and habits of smokers in San José and Jacó, Costa Rica’ in the journal Cuadernos de Investigación UNED, published in December last year offer a very hazy, but altogether a very concerning picture of the trends of habitual smokers since their new environment has been legislated and enforced. Heavy smokers, like their large volcanic counterparts, diminished their smoking incrementally. A stark sadness lies in that trend, most heavy smokers succumb to those terminal diseases that we lose our loved ones to, but when these volcanoes become permanently dormant we can still stand in the presence of their beauty. Medium level smokers sustained the same level of cigarette intake, while at least counter-intuitively, light smokers showed an increase in their smoking habits. Results in this study match similar studies in Australia, but I do know that the heavy tax imposed on tobacco sales, has very indecently, put a large hole the weekly family budget for a large portion of people already on state assistance. It is the single largest preventable cause for disease, and as a smoker myself, I can say it is truly an addiction not to be treated with heavy hands. 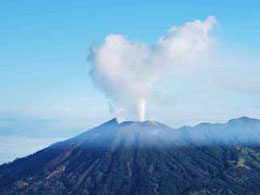 We once lived as great civilizations at the feet of majestic volcanoes, famously in Pompeii under the shadow of Mount Vesuvius on the Italian peninsula. Disastrous consequences fell on all those ancient inhabitants but as modern and educated people of the world, through traumatic experience and observation, most of us have come to change the places and ways in which we live. The great irony in all of this is that the deadly effects of our natural habitats and habits are almost always latent and foreseeable. In the case of volcanoes and addiction, both draw from us a strange reverence for living in awe of powerful forces of destruction, and in reference to the latter, a delayed and tortured death for many millions. Our rituals of playing servants to fuming volcanic god’s has waned in the face of time, science and evidence but the measures taken to prevent the truly preventable still seem to be missing the mark. Unlike ancient people pouring valuable commodities into the mouths of volcanoes to abate and sooth their destructive tendencies, maybe we need to pour more time and money into the science of tobacco addiction. Think twice before you light up another one with your next cerveza, I will certainly be trying. Hopefully we can leave the smoking habit in the tropics of Central America to the volcanoes because they live far longer lives than we can hope for.